What kind of relationship can soap bubble and mathematics have?

We, mathematicians, love talking about how mathematics is inside of everything around us. There are some of us who discover the mathematics in a thing even though it seems to have nothing to do with mathematics. Dr. Dorff is one of those special scientists who found mathematics when he dunked a cube into a bucket full of soapy water twice.

When Dr. Dorff dunked his cube twice, he realized that there was a soap bubble inside the cube which is in the shape of a cube. In other words, dunking made it possible for us to see a hypercube.

What is a hypercube?

Unfortunately human mind is unable to understand more than three dimensions. Although you might have heard that higher dimensions exist. We can show that through physics and mathematics. Hypercube is the name of the cube shape we know in the fourth dimension. Hence what Dr. Dorff discovered was that when he dunked a cube inside a soapy water twice, you get to see a fourth dimension cube.

There is another beautiful thing hidden inside Dr. Dorff’s experiment. Let’s go back in time before I tell you about it.

Greek names dominate when we talk about ancient times and science. Majority of people heard at least one or two Greek names from this magnificent era. There are so many ancient Greek philosophers who influenced world history even though there have been more than 2 millennia since their works were written.

There is an ancient Greek mathematician named Euclid who influenced many scientists for more than 2000 years. His work Elements is known as the second most printed book in the history, right after Bible. The Elements which was consisted of 13 books is considered among one of the most striking books of all times. Until 19th century, Elements were the only source of geometry for scientists such as Newton, Leibniz, Euler etc.

A comparison: Elements were written almost 2400 years ago while the number zero (0) was explained mathematically only around 1350 years ago.

What is inside Elements?

For now I will be talking about the first book of Elements. Book I starts with 23 definitions.

Definition #1: A point is that of which there is no part.

Euclid started writing down what geometry is from scratch. He started with the definitions of point, line, straight-line, surface… and so on. Then he gave 5 axioms/postulates.

Postulate #1: A straight-line can be drawn from any point to any point.

Let us consider we have two specific points on a plane. We can draw infinite number of lines between them even though we can draw only one straight-line. A straight-line is also known as the shortest path between any two points.

Dr. Dorff’s soapy water experiment gives us the answer. I’ve told you that when you dunk a cube inside a bucket full of soapy water, you get a soap bubble inside the cube which gives hypercube. If you dunk the cube only once, you will get a bubble which is in a shape that is a combination of letters H and X. This bizarre bubble shows the shortest path between four points.

Especially in the 90s, 3-D paintings were very popular. These paintings were meaningless until you see what is really hidden inside them. And when you see it, it is impossible not to see it again. 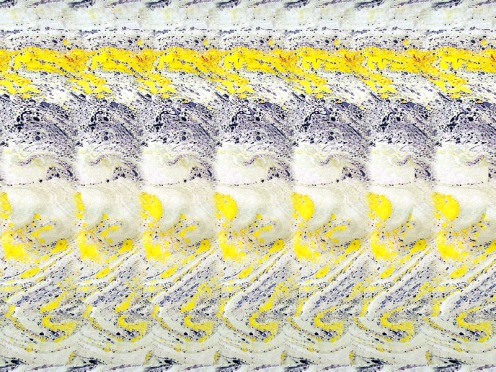 Mathematicians are like those who look and see beyond 3-D paintings. When they see where mathematics is hidden around them, they can’t help but look for new examples. This is one of the most fundamental things needed in order to understand mathematics: Changing your perspective.