Q: How many regular polygons are there?

Then let me continue with increasing the number of sides to construct more polygons. A regular polygon with four equal sides and angles… Hmmm… A square! 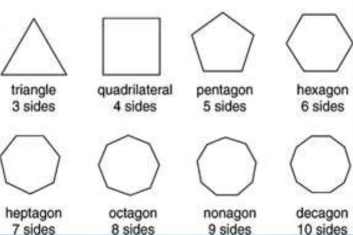 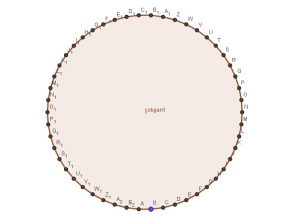 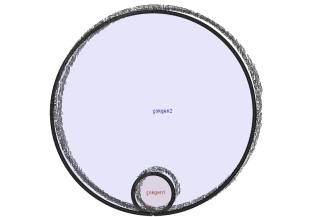 Pentacontagon (left) and its comparison with a regular polygon that has 200 sides.

Regular polygons exist in two dimensional worlds. What if we try to construct regular objects in three dimensions?

Q: How many regular polyhedrons are there?

Let me give you the answer right away: There are five different regular polyhedrons. Exactly five!

The very first time I heard about it, I thought it was bizarre to have only five different regular polyhedrons while there are infinite number of regular polygons. How can coming to three dimensions from two dimensions changes so much?

Around 427 BC a baby named Aristocles was born in Athens. When he grew up, Aristocles had wide shoulders which resulted with him adopting the nickname “Plato” that meant “broad” in Greek. (This story is from C.J. Rowe’s Plato.)

Majority of the people have no idea that Plato was an integral individual for mathematics’ development. His persistence for clearer explanations for proof and hypothesizes evolved mathematics completely. Although his biggest contribution, not just to mathematics but to all branches of science, was the school he founded.

In 387 BC he attempted to build a school in Athens, on the land of a guy named Academas. He gave the school his name: Academy. For over 900 years Plato’s Academy was the home of countless philosophers. (Just for comparison to its worth: University of Bologna was built 1400 years after Academy was founded.)

Polyhedrons are also called Platonic objects because he was the first to explain that there are exactly five of them.

When examined carefully one might see the properties that are exclusive to the regular polyhedrons. These properties both explain and prove why there are exactly five of them.

Take any corner on a tetrahedron. You’ll see that three equilateral triangles meet at that corner. When it is reduced to two dimensions, it would look like as follows: 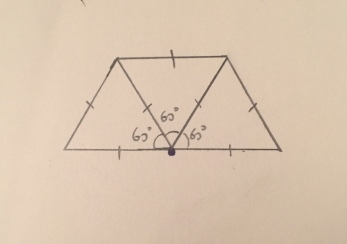 The corner has 360 degree around itself. One equilateral triangle has 60 degrees of internal angle on this specific point which means there are

We are getting close. Let’s use induction and go from tetrahedron to general.

In order to construct a polyhedron we must follow these rules:

We add the sixth triangle. There is 60*6=360 degrees around the point. It is impossible to construct a Platonic solid with these triangles. Actually this shape stays only in two dimensions.

Example 5: Cube and adding a square to it.

We are done with equilateral triangles, hence we move to the next regular polygon: Square. Internal degree of a square is 90, which gives 90*3=270 degrees around the point. It is less than 360 degrees, and that is why it is possible to construct Platonic solid with three squares. This is the fourth Platonic solid: Cube.

If we add one more square, then internal angles around the point will add up to 90*4=360 degrees. It is impossible to construct a Platonic solid in this case. 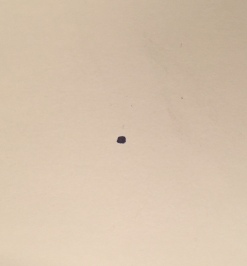 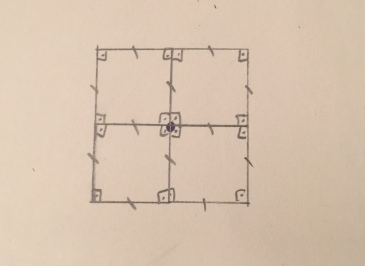 Since we are done with squares, we move to the next regular polygon: Pentagon. A pentagon has internal degrees 108 at its corners. Three pentagons around a point will give 108*3=324 degrees which is less than 360 degrees. So it is possible to construct a Platonic solid with three pentagons meeting at a point. This is our fifth Platonic solid.

Although if we a forth regular pentagon, internal degrees will be 108*4=432 degrees. It is more than 360, which makes the pentagons overlap. Hence it is impossible to construct a Platonic solid with these.

Continue to the next polygon: Hexagon. Examine why it is impossible to construct a Platonic solid with them.