Why do we have round wheels in cars and bicycles?

Let’s construct a square wheel like the following and test if it can be used as an efficient wheel:

After turning the squared-wheel 45 degrees the square will look like the one on the right:

At this position it is clear even to the naked eye that the height of the wheel is taller comparing to its original state. If we continue turning the wheel for another 45 degrees it goes back to its original position.

Squared-wheel has big disadvantages. A car or a bicycle with squared-wheels will be doomed as height of the vehicle constantly changes.

Among the triangles equilateral is the best one for constructing a wheel as all of its sides have equal length:

After turning the triangular-wheel 60 degrees to the left, it will have the same height:

Although let’s go 30 degrees back and examine the height of the wheel:

Here height of the wheel is clearly taller than the height of the original state. This proves that it is not appropriate to construct a triangular-wheel on a vehicle. Otherwise you might have problems with your spine.

Power of the Circle

The reason why circle is the most powerful and convenient shape for our vehicles is that neither of its height nor width changes while rotating. This separates circle from all the other polygons and makes it the best shape for wheels.

Nonetheless, one wonders if circle is the only possible shape for wheels.

Leonardo da Vinci is one of those names that appear in your mind when someone mentions Renaissance. The relationship between this magnificent figure and Reuleaux triangle comes from a world map that was found inside his pupil Francesco Melzi’s notes:

This is known as one of the very first maps that included America. It is believe that this 1514-dated drawing was due to Leonardo da Vinci. If this is true, then it is safe to assume that da Vinci was the first person ever who used the Reuleaux triangle.

It was Leonhard Euler whom discovered the shape and explained it mathematically almost 200 years after da Vinci’s map. You probably realized this from my articles: “It is either Euler or Gauss.”

How come it is called Reuleaux? Because a century after Euler, a German engineer named Franz Reuleaux discovered a machine using Reuleaux triangle. In 1861 Franz Reuleaux wrote a book that made him famous and today he is known as the father of kinematics.

How to Construct Reuleaux Triangle?

I will show you my favorite method for its construction using three identical circles. First draw a circle that has radius r:

Then pick a point on that circle as a center and draw a second circle again with radius r:

At last, pick one of the crossings of the circles as center and draw a third circle with radius r: 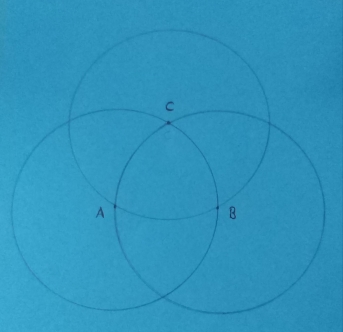 The central area of these three circles is a Reuleaux triangle:

When a Reuleaux triangle is rotating, it will have the same height at all times just like the circle: