When you try to measure the length of a coastline, your finding will increase as your measuring device decreases. It means that there is a proportion between these magnitudes. This is why it is possible to find different (even infinite) lengths for a random coastline.

In the Euclidean geometry a dot has 0, a line has 1, a plane has 2 and a cube has 3 dimensions. But, in the nature shapes of objects are not regular as shown in the Euclidean geometry. In the early 20th century a mathematician named Felix Hausdorff discovered that some shapes have non-integer dimensions. Later on we started calling this non-integer dimension idea as Hausdorff-Besicovitch dimension. This idea was basis for fractal geometry’s development.

In the previous article I showed how one can calculate dimension of a shape in the Euclidean geometry. Same formula can be used in order to calculate objects that don’t have regular shapes. For that, I will be talking about a couple special fractals.

To create a Koch snowflake, one can start drawing a straight line. Then that line should be divided into thirds as the middle part gets erased:

Draw sides of an equilateral triangle above the removed segment: (In other words, add a peak where there is a gap.)

Continue the same process forever and you will get Koch fractal: 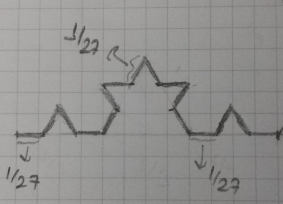 Here are the segments and all of Koch snowflake:

In the first step, we had a straight line that was divided into 1/3s:

If we examine each step of the Koch snowflake we will end up with 4 parts that have 1/3 lengths. Therefore fractal dimension of Koch snowflake (which I call d) can be found as follows:

Let’s try a variant of the Koch snowflake, which we call Koch curve. This time we will draw sides of a square instead of an equilateral triangle.

So, we will start with a straight line that is divided into thirds. Then we will remove the middle part and draw sides of a square that has no bottom line:

Next few stages of the Koch curve will look like the following:

Here we see that in each step, we end up with 5 parts that have length 1/3:

Apply this to the dimension formula and this fractal’s dimension will be as follows:

What does this difference in dimensions mean?

Another handmade fractal is Sierpinski triangle. This famous fractal was first discovered more than 100 years ago and named after a mathematician named Waclaw Sierpinski.

To construct Sierpinski triangle, one must start with an equilateral triangle: 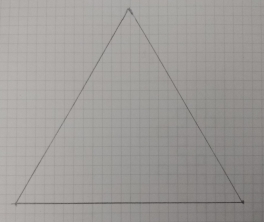 Then mark middle of each side and connect those points to form a new triangle: 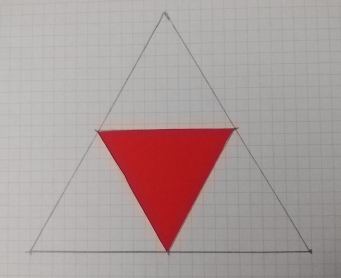 Repeat the steps forever and you will get Sierpinski triangle: 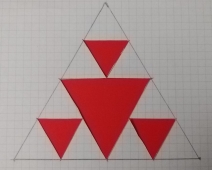 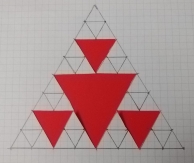