In the previous article I was talking about the numbers which put an end to Hippasus’ life. These numbers are not only fatal; they are also incommensurable as well. On top of these, it is impossible to write these killer numbers as ratios of two other numbers.

I believe that there are more than enough reasons to choose a name such as “irrational” for these numbers. For me, it is astonishing to accept that there are some lengths which we can’t measure although they are just in front of us.

√2: One of the most famous irrational numbers.

Whether we realize it or not we can easily spot these lengths in everything that has square shape. Just divide a square diagonally into two equal parts and you will get two right-angled equilateral triangles. 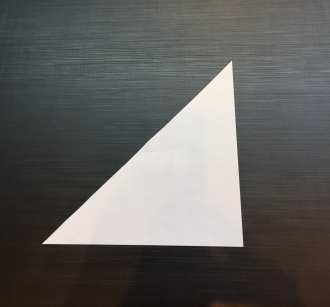 Assume that the square had side lengths 12. This gave a right-angled equilateral triangle with perpendicular sides with length 12. If we apply the Pythagorean Theorem:

This is an irrational number.

In case you’d like to measure this length, you will see a number that has infinite decimals: 16,97056…

I wonder what would happen if I call this number 17.

Although let’s stick to geometry a little bit more and see if we really got something or not.

First we divide the triangle as follows: 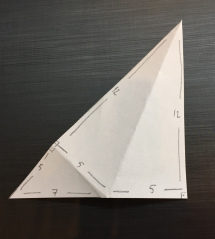 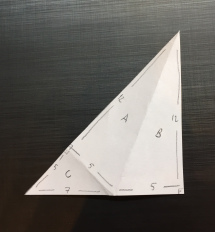 Let’s analyze the triangle C from close. It has perpendicular sides with length 5 and a hypotenuse that has length 7. Using Pythagorean Theorem we can conclude: 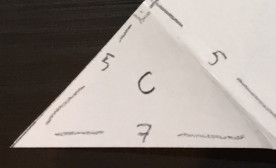 This is a contradiction.

Check and see what would happen if we used a square that has side lengths 10. 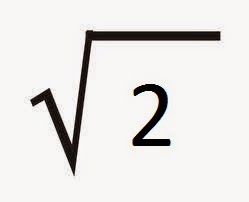 Pythagoras is a very well known historic figure. Even though most of the people know him through the geometry theorem attributed to him, he had accomplished more than just a theorem. He was also the head of the first known science mob in the history.

Pythagoras was born in the island of Samos. He had an enormous reputation as a mathematician throughout the ancient Greece. His followers (Pythagoreans) chose to live as their leader. They were a tight and closed group that ate neither meat nor beans and isolated themselves from having any kind of possession.

According to Pythagoras universe was built on the numbers. Every number had a character and everything that is happening around us could be explained with numbers. He believed that numbers have categories such as beautiful, ugly, masculine, feminine, perfect and such. For instance 10 was the best number because it contained the summation of the first four numbers: 1+2+3+4=10.

Pythagoreans also believe that every number is rational: Meaning that each number can be represented as a division of two other numbers. (E.g. 10/2 = 5)

One day one of Pythagoras’ followers broke his oath and asked the forbidden question: What is the length of the hypotenuse of an equilateral right-angled triangle?

Geogebra shows that the hypotenuse is around 1,41 units. This is not the exact value of the length as this length can never be measured.

Hippasus was a devoted Pythagorean. One day he sailed away with his brothers. When he was in the open sea, he started thinking about the problem of the right-angled equilateral triangle. In the end he claimed that he found irrational numbers. This was an oath breaker as it was forbidden to question Pythagoras’ words. Hippasus never came back from that trip, and Pythagoreans continued to keep the existence of the irrational numbers as secret.

Incommensurables: Do they exist?

According to the Pythagorean Theorem: Length of hypotenuse on a right-angled equilateral triangle.

If Hippasus was wrong, √2 was a rational number which means √2 can be written as the division of two other numbers. Let’s say that this is true and a/b is equal to √2.

Ps: a and b are relatively prime. This means that a/b can’t be simplified; they are the smallest numbers for that ratio.

Let’s square both sides so that we are free from the square root.

Now send the denominator to the left side of the equality.

This actually means that two squares that have side b add up to another square that has side a.

Hence, we just need to show that when we add two identical squares, we can get another square.

Since the little squares add up to the large square, let’s try to put them inside the large one.

As seen above, little squares intersect in the middle and leave gaps on the corners. If we stick to our initial assertion, this intersection must have same area as the gaps. But there is something absurd here, because this intersection is a square. Also the gaps are identical squares that add up to the intersection.

If I call sides of the little squares d, and the big square c:

This result is the same as our starting point. We just found ourselves in a loop which means that our initial assertion was wrong. √2 can’t be shows as a ratio of a/b. Hence, √2 is not a rational number.

In the previous articles I have talked about Plato and his effect on science; particularly geometry. Thanks to his book named Meno, we know about one of the most influential philosophers of all times: Socrates. 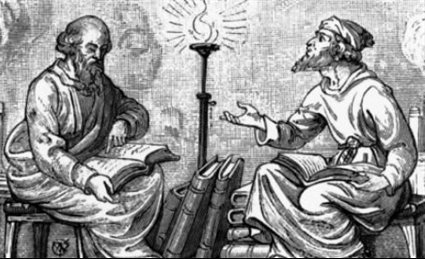 Meno was another book of Plato that was written as dialogues. In this book there were two main characters: Meno and Socrates.

In the beginning of the book Meno asks Socrates if virtue is teachable or not. Even though Meno is crucial for understanding Socrates’ philosophy, there is one part of the book that interests me the most.

The book gets interesting when Socrates starts asking “the boy” who was raised near Meno. At first, Socrates is asking the boy to describe shape of a square and its properties. After a series of questions Socrates asks his main problem: How can one double the area of a given square?

This is an ancient problem that is also known as “doubling the square”. The boy answers Socrates’ questions and eventually finds the area of a square with side length of 2 units. The boy also concludes that since this area has 4 units, double of such square should have 8 units. But when asked to find one side of such square, the boy gives the answer of 4 units. However after his answer the boy realizes that a square with sides of 4 units has 16 units of area, not 8. 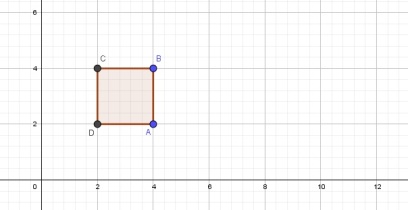 This square’s area is 4 units. Then Socrates tells him to draw three identical squares:

Now Socrates tells the boy to unite these squares as follows: 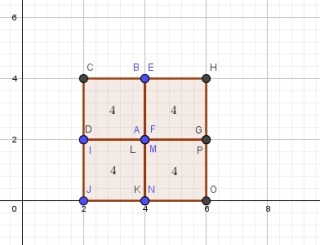 Socrates asks the boy to draw the diagonals in each square. They both know the fact that a diagonal divides a square into two equal areas:

It is easy to see that the inner square has a total area of 8 units:

One side of the inner square is the diagonal from small squares. In order to find that diagonal the boy uses Pythagorean Theorem: 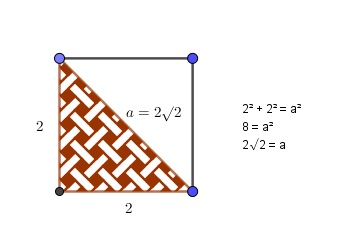 Even though he only uses a compass and an unmarked ruler, the boy found a length that is irrational thanks to Socrates’ instructions. Back in ancient Greece numbers were imagined as lengths/magnitudes. This is why as long as they constructed it neither Socrates nor the boy cared about irrationality of a length.

Pythagoras and his cult claimed that all numbers are rational and they tried to hide the facts that irrational numbers exist. But in the end philosophers like Socrates won the debate and helped mathematics to flourish into many branches.