City of Cyrene was one of the ancient Greek cities that were located in the Northern Africa at around 5th century BC. We are certain that Theodorus (465 BC – 398 BC) was born in Cyrene and he was a tutor of Plato. Theodorus probably met Socrates and lived in Athens for some time. Unfortunately we don’t know much about his life.

Although we know through his student Plato that Theodorus had made significant works on irrational numbers. During ancient times, even though they had number symbols called Attic (also  known as Herodianic symbols) Greek philosophers did not care about number symbols. According to their thinking numbers were just magnitudes of lines. Hence they used line segments to represent numbers.

Pythagoreans thought that every number can be shown as a ratio of any other two rational numbers, and that is why they claimed that numbers are rational. Oddly enough a geometric property what we call Pythagoras Theorem contradicted Pythagoreans’ claims as an isosceles right triangle with 1 unit length sides would have a hypotenuse that is √2 unit length. Unfortunately for them √2 is not a rational number. In other words, it can’t be shown as a ratio of two rational numbers.

In this article I’ll be talking about a work of Theodorus now called Spiral of Theodorus.

Construction of the Spiral of Theodorus

This lovely geometric shape, which is also called “Einstein Spiral”, “π Spiral” and “Square Root Spiral”, could be constructed by anyone who knows Pythagoras Theorem.

At first construct an isosceles right triangle with 1 unit length sides. Through Pythagoras Theorem we can calculate the length of the hypotenuse as √2. 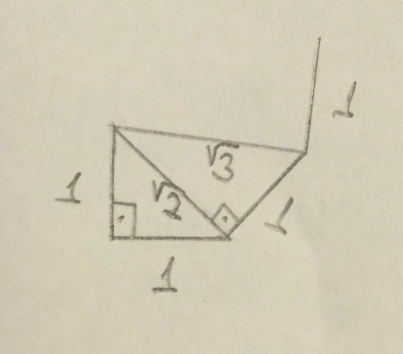 As long as you continue the same process, you will be ending up with hypotenuses with lengths √4, √5, √6, √7 … Theodorus stopped at √17. Probably he ended his structure at 17 because that is the final triangle before overlapping starts. 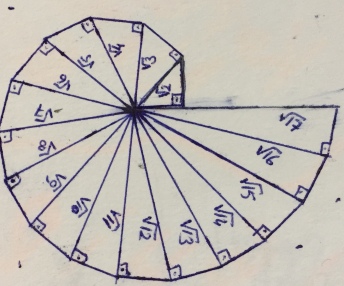 It is obvious to the naked eyes that these triangles form a beautiful spiral, which is called Spiral of Theodorus.

What is so special about the Spiral of Theodorus?

This is my favorite property of the Spiral of Theodorus: Cut off every single triangle from the spiral and align them on the x-y coordinate system.

If you connect the tipping points of every triangle, you would end up with the y=√x curve. I like calling irrational numbers as “killer numbers” because of the story of poor Hippasus. I think it would be suitable to call this curve The Killer Curve.

I also used a program called GeoGebra and find the following result.

What would happen if you take the first triangle like the following?

What kinds of changes do you observe?