The goal of the experiment

After the experiment is done, the following question is asked to the classroom:
“Is there a moment during both walks when the student stands at the exact point?”
In other words, the student walks the same distance in the same amount of time at different speeds. The goal is to find if there is a moment in both walks when the student passes the exact point on the line.
First of all, we should give time to the students for them to think and brainstorm on the problem. Then, using the video shots, the answer is given.
The most important question comes at last: Why so?

Weeding out the stone

In my childhood, one of my duties involved weeding out the stones inside a pile of rice. To be honest, I loved weeding out. Because I was having fun with the rice as I was making different shapes with it.

This astonishing situation was explained by a Dutch mathematician named L.E.J. Brouwer. Brouwer’s fixed point theorem is a topology subject and it is known as one of the most important theorems in mathematics.

The answer to the walking problem,

The walking problem is an example of Brouwer’s fixed point theorem. This is why the answer to the question is “yes”: There is a moment in both walks when the student stands at the exact point on the line.

I will be talking about Brouwer’s fixed point in the next article.

Is there a point on these trips where the man passes at the exact time during both trips?

I was wondering; if there was a list of hall of fame for famous ancient Greeks Pythagoras would find himself in the top ten for sure. What is striking about his fame is that it comes directly from a geometry property. Although mathematicians know that so called Pythagorean Theorem was known to other cultures at least 1000 years before he “discovered” it.

Pythagorean Theorem: In a right-angled triangle sum of the squares of the perpendicular sides gives the square of the hypotenuse that is the longest side of the triangle.

It is being told that there are 367 different proofs for this theorem. Some of them are so similar, even mathematicians have trouble seeing the difference among these proofs.

Let’s check a few of the proofs.

Elisha Loomis talks about a proof for the Pythagorean Theorem in his book “The Pythagorean Proposition”. This proof is special because it came from a high school student named Maurice Laisnez.

I decided to use cutting papers for the explanation. First of all I cut a random right-angled triangle and then made 3 more copies of it. 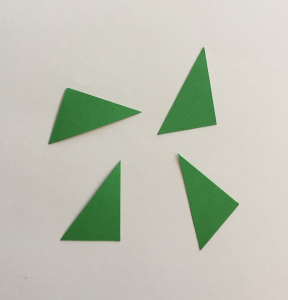 I lined these four triangles up such that it gave me a square inside a square: 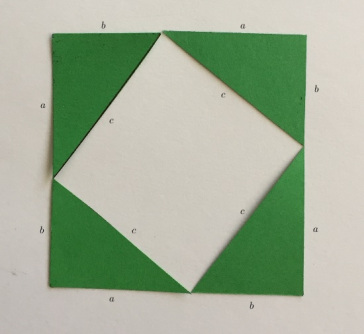 Since sides of the inner square are c, it has area c2.

Marked areas 1 and 2 are squares and their area is equal to the area of the inner square from the previous alignment. Now let’s find the areas of 1 and 2: They make a2 and b2.

Their addition will make c2. Hence:

For the second proof I decided to go to the ancient China.

Zhoubi Suanjing is believed to be written around 500 BC to 200 BC. In the Loomis’ book you can find this proof in the page 253. 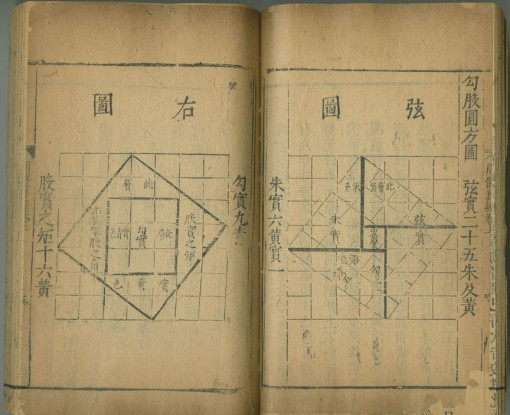 Again I will cut four right-angled triangles for the explanation of the proof. But this time I will cut the triangles such that their perpendicular sides will have length 3 and 4 units. Chinese mathematicians tried to find the third side of the triangle as follows.

In order to start the proof I lined the triangles up like below and a tiny square formed in the middle:

Tiny square A has sides that have 1 unit each. This is why area of A is 1 unit as well.

From here we found length of the third side from the triangles:

This proof shows us that 3-4-5 triangle and Pythagorean Theorem were both known in ancient China.

A farmer dad wants to retire. He would like to divide three of his lands to his two sons equally. But he wants to do that without dividing the lands from each other. What should he do?

X-Y-Z are squares as DCG is a right triangle.